As we approach the very end of the asparagus season for most people in the Northern Hemisphere, we thought now would be a good time to share a new blog. At the peak of the season in early May, we visited the north of Italy to get a closer insight into their asparagus industry. It is a very diverse market as is often depicted in stories of the country itself. 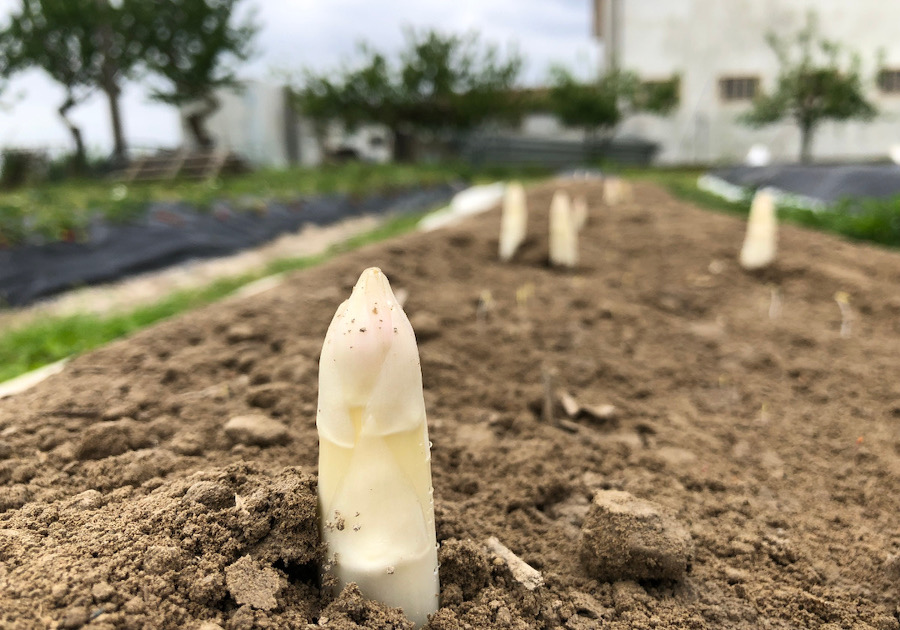 Overall, it is thought that there are 8-10.000 hectares of asparagus production in Italy and this is split between green and white production. Green asparagus accounts for approximately 85% of the total area. White asparagus is mostly produced in the Veneto region in the north-east of the country. The green asparagus harvest starts in the south of the country, normally in February and this continues into May, with a peak around the middle of March. Production in the north of Italy generally commences in April and continues into June.

The type of plant material used in asparagus plantations displays a north, south divide. More than 90% of plantings in the south of Italy are established from module / plug plants. On the other hand, crowns dominate in the north of the country with a similar percentage share. The number of plants used per hectare depends on a range of factors but is broadly governed by the growing system and intended market for the produce. Green asparagus is grown at densities of around 25000 plants per hectare, whereas white production can be as low as 13000. Yields of Italian asparagus are in the higher echelons of world production with the white product offering 8-9t per hectare and green all the way up to 12t / hectare.

It is thought that circa. 60% of asparagus produced in season is sold domestically within the country. However, one area where sales could be increased is in restaurants. Anecdotally, we were told that it is not easy to find asparagus in season when eating out.

One interesting trend that is really developing across the country is a demand for improved flavour in asparagus. This is being driven by consumers. Some retailers have seen struggling sales as varieties with improved shelf-life have taken preference over flavour. The topic of flavour is actually a combination of the taste of the asparagus but just as importantly, the texture. Lower fibre contents improve the eating experience markedly.

At Global Plant Genetics, we are working to bring the white asparagus variety, Vittorio, to market. It delivers excellent all-round results in terms of yield and flavour. For these reasons, it is becoming an important hybrid in markets where taste is paramount.

Stay tuned to our blog for the latest developments at Global Plant Genetics.